The issue of suicide has been on my heart lately after the Newtown shootings because the shooter also took his own life.  I began to do some research and was shocked to discover that the US has a rising suicide rate and its the tenth reason for death in America.  Thus, I felt led to write this blog to offer resources and help!

Here are just some quick facts about suicide from the “American Foundation for Suicide Prevention.” 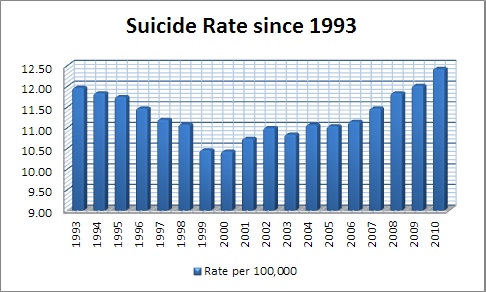 As one can easily see from the chart and stats above suicide is a major problem in the US. However, there doesn’t seem to be a clear solution from the professionals.  Some blame the drug industry claiming that the rise in the rates over the last five years is due to the increase of people being given dangerous psychiatric drugs, (click to here for more info on this belief).  On the other hand, some believe that proper treatment with psychiatric drugs does produce more of a positive change than those who don’t take them, thus leaving people untreated causes the real problems, (click here for more info).

To make the issue even more confusing, there is also disagreement between Christians.  Some Christians believe that all suicide is preventable and is an act of selfishness or self-murder, thus it is a serious sin against God, (click here for more info).  Yet other Christians believe that suicide is an illness just like cancer or diabetes thus the person shouldn’t be thought of sinning but rather suffering from a disease, (click here for more info).

As a result of the above conflicting beliefs in the psychiatric and church worlds I believe the ones who need the most help suffer the most and can get lost in the debate.  Therefore, to avoid adding to the debate or the confusion, I would like to simply share some of the main triggers for suicide and the best ways I believe we can help prevent it.

Some of the Major Causes or Triggers for Suicide

1-BE READY TO HELP |  If someone is suffering from depression and mental illness we should offer them the best in help from both the church and medical science. If someone even mentions or hints towards wanting to take their own life, caring people should rally behind them and help them seek help.

2-OFFER JESUS AT ALL TIMES | When the soul and spirit is right with God it will help assist the physical body in healing.  Meaning, if I had a healthy walk with God and lost my arm in an accident, having Jesus would make my recovery easier.  Thus, incorporating Jesus and personal salvation into the mental therapy is a must because Jesus and the Bible grounds a person’s hope in life and in the future, Isaiah 40:28-31.

3-TEACH THE TRUTH ABOUT SUICIDE AND THE MEANING OF LIFE | I believe that many people don’t have the right definition or understanding of life and suicide.  Thus, when things in life go wrong they may get depressed and hide it because they believe that things won’t change.  Thus, they can feel suicide will make things better for themselves and the people around them. However, the Bible teaches the correct meaning of life, the value of each life, and ultimately how to have hope in this life in Jesus.  We must teach these things to our friends and family because correct theology will affect our every day lives, John 8:31-32.